Cell-free fetal DNA (cffDNA) is fetal DNA circulating freely in the maternal blood stream. It can be sampled by venipuncture on the mother. Analysis of cffDNA provides a method of non-invasive prenatal diagnosis and testing. 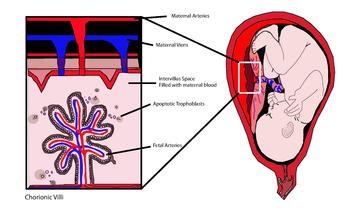 Studies have looked at, and some have even optimized, protocols for testing for various issues, including non-compatible RhD factors, sex determination for X-linked genetic disordersand testing for single gene disorders.[10] Current studies are now looking at determining aneuploidies in the developing fetus.[11][12] These protocols can be done earlier than the current prenatal testing methods, and have no risk of spontaneous abortion, unlike current prenatal testing methods.[13] Non-invasive prenatal diagnosis (NIPD) and Non-invasive prenatal testing (NIPT) have been implemented in the UK and parts of the US; it has clear benefits above the standard tests of chorionic villi sample (CVS), amniocentesis,[14] and other techniques which have procedure-related miscarriage risks of about 1 in 100 pregnancies and 1 in 200 pregnancies, respectively.[15][16][17]

As a method of prenatal diagnosis, cell-free fetal DNA techniques share the same ethical and practical issues, such as the possibility of prenatal sex discernment and sex selection.[10]